BACK IN STOCK AT LAST!

The Musician's Dice are back in stock at last, yay! Click here to order from us direct!

A brief History of Chance

Incorporating elements of chance in musical composition and performance is not new: musical dice games date as far back as the late 18th century. Best known of these is the “Musikalisches Würfelspiel,” attributed – perhaps falsely – to Mozart; in it, two standard six-sided dice are used to string together composed phrases in random ways. In the twentieth century, Charles Ives, Pierre Boulez, and Karlheinz Stockhausen all utilized randomness to some degree in their work, mainly by leaving certain aspects of form up to the musician. It was John Cage, though, who pioneered the use of chance elements while actually composing – employing, among other things, the I Ching. In the latter part of the century, Brian Eno pioneered the use of chance elements in the studio, founding Ambient Music along the way.

A CHILD IS BORN.

The Musician’s Dice are derived from Muzoracle, a music-based system of divination developed by composer and recording artist J S Kingfisher. In addition to the applications listed above, the dice in this set can be used in conjunction with the Muzoracle system. Also included in the Muzoracle and available separately are the Solfége Dice: Musician's Dice printed with solfége instead of specific pitches. Finally, much tinkering and play with the Musician's Dice spawned an award winning, three-way crossword-style game of music theory called Muzundrum. It would seem we just can't take enough chances... 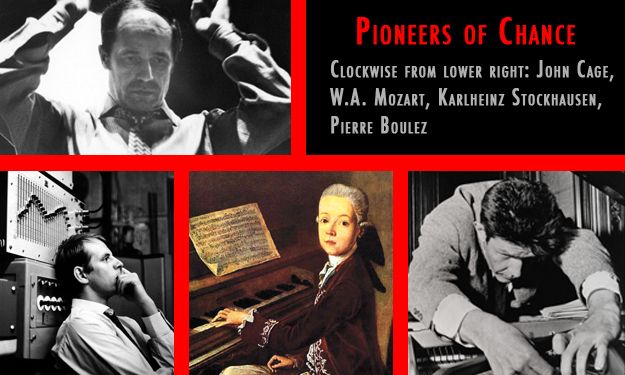